The Avengers: Age of Ultron thunders into theaters today! Poised to be one of the biggest films of the year, Joss Whedon’s return to Earth’s Mightiest Heroes will introduce the villain Ultron to the cinematic universe. Longtime fans will immediately shiver at the name “Ultron,” as the robotic foe has tormented the Avengers since the 1960s, born from Hank Pym’s experiments and brain patterns. Whedon will no doubt add his own spin to the supervillain, but below are select highlights from the comics, along with a few picks to get readers up to (super)speed and ready to cheer, “Avengers Assemble!”

“Ultron Unlimited” by Kurt Busiek and George Perez: Across The Avengers issues #19-22, fan-favorite writer Kurt Busiek and legendary artist George Perez crafted one of the best-ever Avengers stories, making a true supervillain out of Ultron in the process. Fight scenes abound, Hank Pym confronts his creation and the horror it wrought, and Ultron unleashes his drones (also in the film!). Readers can find these issues collected in Avengers Assemble Vol. 2 and the 1,100-page Earth’s Mightiest Heroes hardcover omnibus. 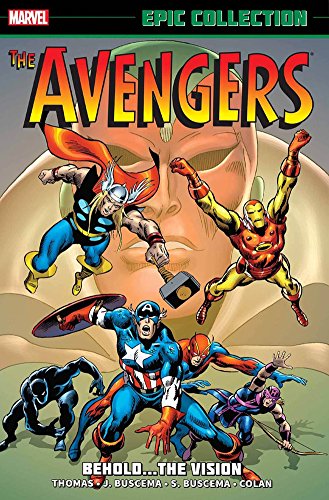 Avengers: Behold…the Vision by Roy Thomas, John Buscema, and more: It’s not a spoiler to say that the character named Vision plays a big part in Ultron’s history and in the new film as well. Witness his debut and more Ultron action in this classic “Epic Collection.” My lips are sealed!

Avengers: Age of Ultron by Brian Michael Bendis and Bryan Hitch: Although they feature the same title, the comic and the film share little else, save the titular villain. It’s still a great story, however, presenting a world annihilated by Ultron. The few remaining superheroes travel back in time to stop him but they also cause damage to the timeline, creating new catastrophes as they solve others. It’s mind-bending popcorn fun.

Avengers: Rage of Ultron by Rick Remender and Jerome Opena: Already covered in a previous GNF post! It’s a must-read if readers want to know where Ultron and the Avengers stand today.

The Art of Avengers: Age of Ultron by Marvel Comics: This fancy slip-cased hardcover features plenty of artwork and behind-the-scenes goodies from the new film, including commentary by Joss Whedon and producer Kevin Feige. It releases May 12 and contains spoilers, so I had to put it back on the shelf—be warned!

Young Avengers: The Children’s Crusade by Allan Heinberg, Jim Cheung, and Olivier Coipel: This is an under-appreciated Avengers tale that digs deeply into Scarlet Witch and Quicksilver (two characters introduced in the new film). It’s also a personal favorite that we featured here and named a Best of Year pick in 2012.