Hemingway’s first bestselling novel, it is the story of a group of ‘Lost Generation’ Americans and Brits in the 1920’s on a sojourn from Paris to Pamploma, Spain. The novel poignantly details their life as expatriates on Paris’ Left Bank, and conveys the brutality of bullfighting in Spain. The novel established Hemingway as one of the great prose stylists of all time.

Underworld is about the second half of the twentieth century in America and about two people, an artist and an executive, whose lives intertwine in New York in the fifties and again in the nineties. With cameo appearances by Lenny Bruce, J. Edgar Hoover, Bobby Thompson, Frank Sinatra, Jackie Gleason and Toots Shor, “this is DeLillo’s most affecting novel…a dazzling, phosphorescent work of art” (Michiko Kakutani, The New York Times).

3The Age of Innocence
by Edith Wharton

Winner of the 1921 Pulitzer Prize, this elegant, masterful portrait of desire and betrayal in old New York is the story of the very correct Newland Archer whose marriage to the docile May Welland is thrown into upheaval by the sudden appearance of the mysterious, intensely nonconformist and intoxicating, Countess Ellen Olenska. This classic tale of thwarted love is an exuberantly comic and profoundly moving look at the passions of the human heart, as well as a literary achievement of the highest order.

4A Separate Peace
by John Knowles

Set at a boys’ boarding school in New England during the early years of World War II, A Separate Peace is a harrowing and luminous parable of the dark side of adolescence. Gene is a lonely, introverted intellectual. Phineas is a handsome, taunting, daredevil athlete. What happens between the two friends one summer, like the war itself, banishes the innocence of these boys and their world. On the summer reading lists of generations, this classic belongs on every shelf.

5Gone with the Wind
by Margaret Mitchell

The 1936 Pulitzer Prize winner and one of the bestselling novels of all time explores the depth of human passions with an intensity as bold as its setting in the red hills of Georgia. A book to read again and again because, after all, tomorrow is another day.

6The Turn of the Screw
by Henry James

One of literature’s most gripping ghost stories depicts the sinister transformation of 2 innocent children into flagrant liars and hypocrites. Elegantly told tale of unspoken horror and psychological terror creates what few stories in literature have been able to do — a complete feeling of dread and uncertainty. 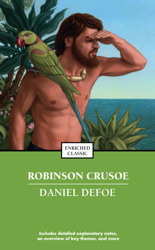 The acclaimed tale of a shipwrecked Englishman who finds himself stranded on an island off the coast of South America, a story of survival, self-reliance, adventure, and faith. TGIF.

The novel of the Jazz Age. The story of the fabulously wealthy Jay Gatsby and his powerful love for the beautiful Daisy Buchanan is an exquisitely crafted tale that has been essential reading since it was published.

Originally issued in 1966 in a print run of 50, this collection of experimental prose poems was long available only as a bootleg until it was finally published in 1971, to wide disclaim. Mastery or mischief, you decide, but it’s still a fun book to have on your shelf next to Chronicles and John Lennon’s In His Own Write.

Edited by the legendary Maxwell Perkins and published in 1929, Wolfe’s first novel, about a young man’s burning desire to leave his small town and tumultuous family in search of a better life, gave the world proof of his genius and launched a powerful story that has touched millions.